“For decades, pollution and its harmful effects on people’s health, the environment, and the planet have been neglected both by Governments and the international development agenda. Yet, pollution is the largest environmental cause of disease and death in the world today...” The Lancet Commission on Pollution and Health, October 19, 2017   Graphic Credit: World … END_OF_DOCUMENT_TOKEN_TO_BE_REPLACED

Solutions for Neurotoxicants: A Model for All Toxics 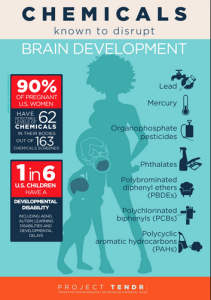 It’s daunting enough to attempt to bring in effective chemical regulation on a national basis. So how can it be done internationally? The task seems overwhelming, and yet, if toxics can’t be tackled globally, then national, provincial and state strategies are less likely to succeed, since pollution spreads through the ecosystem and through commerce and trade. Graphic Credit: Project Tendr

In their December 2017 article on the costs of preventable environmental exposures to chemicals totaling more than 10% of GDP, Drs. Phillip Grandjean and Martine Belanger place their very highest concern on chemicals that act as “neurotoxicants.” And for good reason: the ability to think, and think clearly, at a high level of intelligence and full competence is critical for individual, societal and species success. Full stop.

In 2006 Dr. Phillipe Grandjean collaborated on a study with Dr. Philip Landrigan (who is also co-chair of the Lancet Commission on Pollution and Health) and wrote an article devoted to these types of chemicals and their effects in children. Then in 2014 the two authors updated their findings and expanded their key concerns from six to twelve classes of chemicals. They published their findings in “Neurobehavioural effects of developmental toxicity” in Lancet Neurology in October of that year.*

Here, in the words of their abstract, is a summary of their 2014 findings. Disturbing as these findings are, don’t stop reading there. Because Drs. Grandjean and Landrigan also put forward a powerful solution that can be taken up by people in every country and jurisdiction to bring the plague of neurotoxicants under control, and can, indeed, serve as a model for many other types of toxics.

Of course, like all other effective solutions, they require the enlightened and pro-active initiatives of national governments working with the precautionary principle and capable of taking national and international action – so in this, as in all things to do with change in chemicals – politicizing pollution remains the order of the day.

Here is a summary of the key findings from Dr. Grandjean and Landrigan in 2014:

Neurodevelopmental disabilities, including autism, attention-deficit hyperactivity disorder, dyslexia, and other cognitive impairments, affect millions of children worldwide, and some diagnoses seem to be increasing in frequency. Industrial chemicals that injure the developing brain are among the known causes for this rise in prevalence. In 2006, we did a systematic review and identified five industrial chemicals as developmental neurotoxicants: lead, methylmercury, polychlorinated biphenyls, arsenic, and toluene. Since 2006, epidemiological studies have documented six additional developmental neurotoxicants—manganese, fluoride, chlorpyrifos, dichlorodiphenyltrichloroethane, tetrachloroethylene, and the polybrominated diphenyl ethers. We postulate that even more neurotoxicants remain undiscovered.

Here is their proposed solution:

An International clearinghouse on neurotoxicity

The main purpose of this agency would be to promote optimum brain health, not just avoidance of neurological disease, by inspiring, facilitating, and coordinating research and public policies that aim to protect brain development during the most sensitive life stages.

The main efforts would aim to:

Here is an excerpt from their article that provides more detail. (Note how firmly the proposal is rooted in the Precautionary Principle, and how it rejects any further voluntary controls as useless):

To control the pandemic of developmental neurotoxicity, we propose a coordinated international strategy. Mandatory and transparent assessment of evidence for neurotoxicity is the foundation of this strategy. Assessment of toxicity must be followed by governmental regulation and market intervention, Voluntary controls seem to be of little value. (Graphic credit: Dreamstime).

The three pillars of our proposed strategy are:

These new approaches must reverse the dangerous presumption that new chemicals and technologies are safe until proven otherwise. They must also overcome the existing requirement to produce absolute proof of toxicity before action can be started to protect children against neurotoxic substances.

Precautionary interpretation of data about developmental neurotoxicity should take into account the very large individual and societal costs that result from failure to act on available documentation to prevent disease in children. Academic research has often favoured skepticism and required extensive replication before acceptance of a hypothesis, thereby adding to the inertia in toxicology and environmental health research and the consequent disregard of many other potential neurotoxicants.

Additionally, the strength of evidence that is needed to constitute “proof” should be analyzed in a societal perspective, so that the implications of ignoring a developmental neurotoxicant and of failing to act based on available data are also taken into account.

Finally, we emphasize that the total number of neurotoxic substances now recognized almost certainly represents an underestimate of the true number of developmental neurotoxicants that have been released into the global environment. Our very great concern is that children worldwide are being exposed to unrecognized toxic chemicals that are silently eroding intelligence, disrupting behaviours, truncating future achievements, and damaging societies, perhaps most seriously in developing countries. A new framework of action is needed.