In Child Honoring: How to Turn this World Around. Raffi Cavoukian and Sharna Olfman, editors. Foreword by the Dalai Lama. Praeger, 2006.

In this article, Varda sets out a step-by-step program for effecting major changes in children’s, family and public health with respect to environmental factors. It appeared in the highly acclaimed anthology, Child Honoring: How To Turn This World Around, edited by Sharna Olfman and children’s entertainer and environmental activist Raffi Cavoukian, with a foreword by the Dalai Lama. It also appeared in 2006. 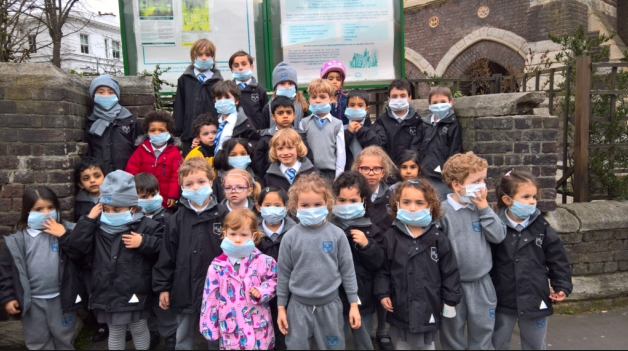 FOR people who care about the environmental health and safety of children, three different campaigns in 2005 modeled intelligent, effective strategies for using public institutions — in this case, schools — to bring about change. In September, newspaper headlines announced that England had banned junk food in its schools. In the United States, the State of New York, following in the State of Washington’s footsteps, banned the use of toxic cleaning products in schools. And, in a number of other states including California and Minnesota, yet another crucial initiative — the ‘Safe Schools Project’ — has been gaining ground. School board by school board, and state by state, the schoolyard use of toxic pesticides especially harmful to children has been banned.

These three campaigns show that we can use our political institutions and public agencies to say no to harmful products and technologies — and that schools can be very valuable in this process. Even more promising, these examples also contain within them some of the potential seeds of a future child-honouring economy, because they create big markets for producers of environmentally benign technologies to provide Earth- and child-friendly products.

A world fit for children is what all our children deserve: a world where they may grow and live toxic-free, free of the harmful human-made threats to their well-being. Safeguarding children begins with an identification of harms posed by toxic substances early in life, and in utero, where many toxic compounds impact. When Theo Colborn and her colleagues Dianne Dumanoski and John Peterson Myers published the groundbreaking book Our Stolen Future: Are We Threatening Our Fertility, Intelligence, and Survival? A Scientific Detective Story in 1996, documenting the special vulnerability of children to chemicals found in everyday pesticides, plastics, solvents and cleaning materials, most of us got our first look at the profound damage that our chemically-dependent economy has been doing to the delicate but all-important ‘inner-space’ of developing cells, tissues and organ systems in our smallest people. Since then, people like Colborn, as well as Philip Landrigan (represented in this volume) and many others have been working hard to get governments to recognize children’s special vulnerability to environmental harms, and to legislate and enforce on the basis of this knowledge.

Creating a world fit for children means acknowledging that we are a species in crisis and we must act quickly. The degree to which our air, soil and water pollution has reached into the very flesh and blood of our children is itself cause for grave concern. Every day brings new reports of ecological decline so great as to indicate that we have already reached the ‘tipping point’ on a number of fronts. Estimates from scientists tell us we have five to twenty-five years to deal with the big problems. Global warming, melting glaciers, droughts, destructive hurricanes, hurricanes where there have never been any before — extreme climate change is now believed to be accelerating much more rapidly than was thought even two years ago. Authoritative studies show that we are tapping most of our natural resource systems beyond sustainability or renewal. The longer it takes us to reverse the ratio of positive change to encroaching harm, the harder — and costlier — it will be in the long run.

Addressing the imperiled state of our biosphere and the dangers this poses to children requires systemic change on a massive scale. Tinkering with how we provide health care or how we package and manufacture goods, or driving hybrid cars — while necessary — won’t be enough. We do have the technical means — the technologies and processes that can reduce our pollution and reverse our use of natural capital to sustainable levels. We will, however, require broad social changes to (re)organize the ways we live: how we work (and what work we do), how we grow and prepare food, how we use energy, how we educate and care for ourselves, how we make and use everyday products.

Praise for Child Honouring: How to Turn this World Around.

“For new ideas and a clear vision of how to reshape ‘a world fit for children,’ by all means read this sobering, salutary and inspirational book.” (Stephen Lewis, former Canadian Ambassador to the United Nations.)

“Child Honoring is a bold vision for a humane and sustainable world.” (Robert F. Kennedy Jr., Environmentalist, author of Crimes Against Nature.)

“This excellent book exposes the corporatocracy that challenges the very essence of good parenting by putting profits before children. It heralds a major shift in priorities for detoxing the womb environment and assuring that each child reaches its fullest potential as a human being.” Theo Colborn, Ph.D., co-author of Our Stolen Future and president, The Endocrine Disruption Exchange (TEDX).

“What an ambitious and timely project this is!… I hear the plea to turn away from our present value systems (money, power, war, aggression) and to honor our children and their families… Let’s all listen!” ( T. Berry Brazelton, M.D., Professor of Pediatrics, Emeritus, Harvard Medical School, Founder, Brazelton Touchpoints Center.)

“How often do you come across a book that might actually change the world for the better?… Read it, believe it, and pass on the message!” Jane M. Healy, Ph.D., Educational Psychologist and author, Your Child’s Growing Mind: Development and Learning from Birth to Adolescence.