Before we spend a little time considering the fate of everything – which does, indeed, rest on the health of our threatened oceans – let’s take a moment to acknowledge some of the important victories of 2017. Topping the list: despite the pro-carbon regression of the Trump administration, sustainable energy is here to stay. Earth, wind and lithium are growing by leaps and bounds, and their prices are dropping to the point where they are cheaper than carbon and nuclear. Now all we need is a massive change in the pricing and subsidy policies of all governments, whose decisions fund energy infrastructure. So, reason number one to politicize pollution.

Earthjustice (U.S.) has a long list of victories that will work better than designer drugs to ease your ecoanxiety, and Ecojustice (Canada) (Victory Report) though smaller, is very heartening. Visit two of my favourite environmental justice organizations and see how the work of DWEJ (Detroiters Working for Environmental Justice) and Dream Corps can make your sagging spirits soar. A major victory in the U.S. – the city of Portland, Maine, has just banned synthetic pesticides, making Portland the largest city in the country to take this step so far.

For more good news, checkout Desmog Canada’s list of great natural resources stories for 2017. You can also find some good news at Radio Canada International’s list of big stories in 2017. And if you want reassurance that there are lots people out there with new ideas and tons of energy – if you want to meet a few who could be role models for you, for that matter – drop in to visit Grist’s 50 “fixers”, people Grist describes as “bold problem solvers working toward a planet that doesn’t burn and a future that doesn’t suck. For our annual list of emerging green leaders, Grist brings you 50 innovators with fresh, forward-thinking solutions to some of humanity’s biggest challenges.” So, there’s no doubt that people of all ages, all communities, all colours and ethnicities, are mobilizing. That’s just some of the good news, and it is great.

NOW, FOR THE BAD NEWS…

The bad news, however is this: so far, environmental carnage is outstripping human efforts to stop it. Bluntly put, this means unless we get even more active and much more effective, we won’t win the race against time – time to attenuate climate change and the effects of toxics. After fifteen years of unprecedented climate disasters, 2017 brought even bigger ones closer to our North American homes : hurricanes, wildfires, droughts and floods of stunning proportions – and even with amazing first response, we were powerless to stop the phenomenal wreckage and trauma that will mark many people’s lives until the day they die. And for tracking other news in the midst of these disasters, the fruits of two of decades of research about toxics and human health in the United States were published by the U.S.’s National Institutes of Health and EPA, from their funded children’s research centres studies that together confirm the very worst-case predictions made by scientists in the early-mid 1990s about the effects of various types of toxic chemicals. Their conclusions, staggering in their implications, will require sweeping measures, both to support those already affected and to stop the damage being done. Read about it below and on the Children’s page on this site.

But the disaster that perhaps looms most dangerously of all – and most out of sight – is the one most of us never even see: the state of our oceans.  The direst of warnings have come again about their impending death, this time from the the U.N.’s environmental summit in Nairobi, Kenya earlier this month. “We’re facing an ocean Armageddon,” Erik Solheim, U.N. environmental chief and Under Secretary General, said while there, and he made the consequences of this impending catastrophe very plain: “We need to understand that if we kill our oceans, we also kill ourselves.” This is about oxygen. The oceans are home to the plankton that produce up to 70% of our oxygen. So if the oceans can’t sustain the plankton, we run out of breath. Seriously out of breath. 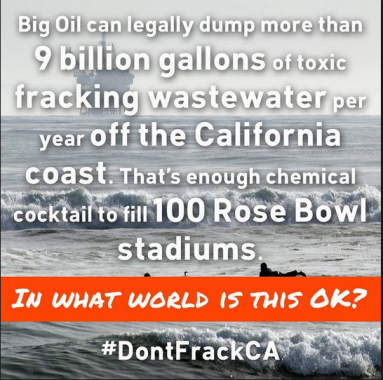 According to the U.N. Environmental Programme, after decades of uncontrolled dumping, large parts of the ocean have become contaminated “with high concentrations of harmful pollutants, including heavy metals, inorganic nutrients, and chlorinated petrochemicals”.

And, of course, as Mr. Solheim pointed out and as many other scientists and marine environmentalists have been warning about, the oceans are being inundated by uncountable tons of plastic products that will take millions of years to break down, but even now are destroying marine life in myriad ways, including by crumbling into pieces that sea creatures eat, causing them to sicken and die. In 2015, the World Watch Institute estimated 10-20 million tons of plastics are being dumped into the ocean every year and recycling efforts lag way behind.  At the current rate, Mr. Solheim added, “we’ll end up with more plastic in the oceans than fish by the middle of the century, and ultimately that comes back to our own food chain.” And what about at an accelerated rate? The Guardian reports that a “colossal investment” of $180 bn in new plastics plants in the U.S. by major companies – including Shell Chemical and Exxon Chemical – is set to boost production by 40% – a catastrophic increase.

Seven thousand delegates from around the world, including 100 government ministers, considered the situation at some length in Nairobi in December. They passed a number of good resolutions, on paper. Unfortunately, these are not binding on member states. Given that U.N. scientists predicted four years ago that we had five years to save the oceans, this lack of hard commitment leaves us breathless already.

However, on the positive side, there is a strong push toward a real treaty that would ban plastic waste on the basis of a “zero tolerance” policy. The U.N. Secretary General’s Special Envoy for the Ocean, Peter Thomson, told CBS News, “There is no doubt that the UNEA meeting in Nairobi will be an important step in combating humanity’s pollution of the ocean with plastic. There is no quick fix to this gigantic problem and many processes and methods will be required to correct the wrongs that we have brought upon the ocean with our plastic plague.”

Just as with so many other massive environmental problems, solutions to the dying ocean must be socially organized, and that points ineluctably to government: government at city, county and state/provincial levels to bring about change where human life meets the oceans; government at national and international levels to effect change where the heaviest and most international types of actions – such as enacting laws that ban the classes of chemicals that are killing the ocean, or organizing trans-boundary clean-ups, or creating treaties with teeth – are required.

“This is an environmental disaster caused by laziness that is easily fixed by a healthy dose of innovation and political will,” Mr. Solheim told CBS news. “It’s a simple case of changing our habits, and stopping plastics from entering the ocean in the first place. For that we need governments to take action, and ensure that polluters pay and recycling is rewarded. There are plenty of natural alternatives to plastics beads in toothpaste or face scrub …

There are already are many ways to make biopolymers from benign bio-mass.

Live algae for3D printer use to make bioplastic  from pond scum, the work of Erik Klarenbeek and Martje Dros, who have made other types of biopolymers, such as mycelium, potato starch and cocoa bean shells. One day, the duo hope to set up a local network of biopolymer 3D printers, which they have dubbed the “3D Bakery.” https://www.ecowatch.com/dutch-3d-print-algae-products-2515117809.html. Photo EcoWatch.

Politicize Pollution to win the race for the oceans

The solution is, indeed, easy to state. Making it so, creating the political will, and the instruments to implement it – this will have to be the work of hundreds of millions of people who, as eco-citizens, decide to make it their goal in 2018 to politicize pollution.

What can you do? Make a New Year’s resolution to take some big steps in that direction, and follow through.

Because if there is one lesson we can learn from the last sixty years of environmental organizing against toxics, it is this: the chemical industry will not willingly change its toxic products, and has to be compelled by governments to change or face retirement . And that won’t happen until the people who steer the ship of state their realize their own political lives depend on them becoming eco-representatives. So make their oxygen go away if they don’t take serious and timely action to save the oceans, and by definition, clean up how humans produce chemicals, all the way down the supply chain. One very important way to do that is by letting them know, at all important moments, that you’re watching and that your vote depends on their actions.

POST SCRIPT: SITE C DAM DECISION OF BC NDP GOVERNMENT ASTOUNDINGLY ON THE WRONG SIDE OF HISTORY

ON this need to communicate your insistence on a new approach – a “Green Deal” approach – to governance, I’d like to close out with the message I sent to John Horgan, the new NDP Premier of British Columbia. After campaigning with provincial Greens on a program of promises last summer, and winning, in December Mr. Horgan spectacularly broke one of the most important of these by deciding to go ahead with the flooding of the Peace River valley and complete the Site C dam  even though there is no economic or technological need for it, and every environmental and economic need to stop it.

Here is the message I sent to Premier Horgan, copied to the NDP federal leader, Jagmeet Singh. (Because if you don’t tell them what you think, they won’t know.) 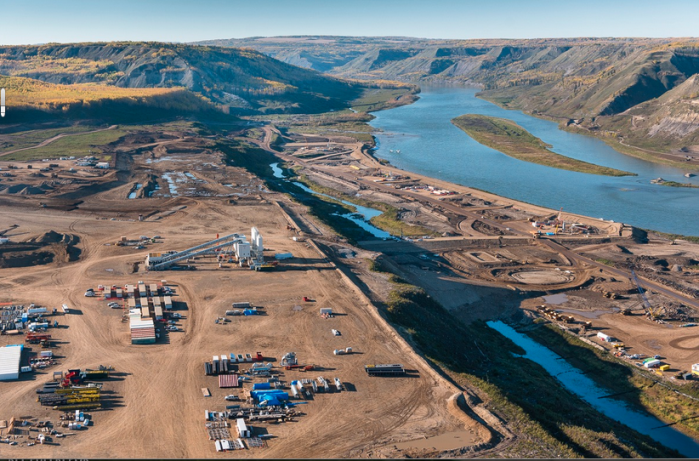 Part of the Peace River Valley where work has begun, and which the Site C project will flood, destroying many community, family farms and an entire ecosystem. Photo: DeSmog

Subject line: Betrayal of intelligence and vision – Site C decision on wrong side of history

Your decision to proceed with the Site C dam is catastrophic for the people of the Peace River Valley, the entire west coast of North America, and so, by extension, for the continent as a whole. But it is equally deadly to the hope and belief in good governance that lit up the hearts of those who voted for you – hopes that governments with sufficient smarts, imagination and will could productively marry economic and social development with environmental protection. Along with David Suzuki and so many others, I say you blew this hope away for no justifiable reason.

Unless you change course – and it is not too late to do it! – you will feed into political cynicism even more profoundly than the eco-terrorist who currently occupies the White House. People expect him to ravage the land. People expected you to protect it. I have no doubt the NDP provincially and federally will lose many, many supporters as a result of this decision, unless and until the NDP becomes the true party of green economic development. I am one such person.

Please, change your mind, and give us all some hope for 2018!

Best wishes to all for a green, healthy and prosperous New Year

To readers: thank you for stopping by Dispatches from the Chemical Edge. May 2018 see tipping points in the right direction, in our collective efforts to restore ourselves and our environment to balance and health. Wishing all of you and yours a peaceful holiday season. I’ll be back early in the New Year.